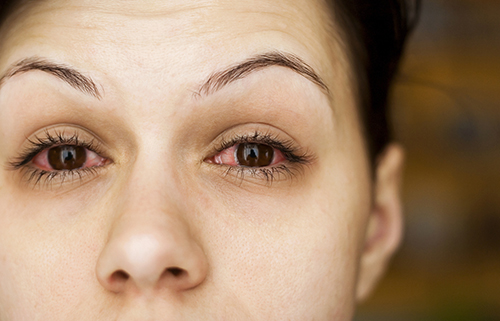 When the inflammation becomes so intense that the blood vessels to the site of scleritis become occluded, necrosis can occur. Necrotizing scleritis is a severe form of scleritis, almost always associated with severe systemic autoimmune disease.

Non-infectious scleritis tends to be chronic and requires long term therapy. In general, therapy with eye drops is not effective. Non-steroidal anti-inflammatory drugs (NSAID), similar to ibuprofen, are the treatment of choice. In cases that don’t respond to NSAIDs, oral steroids or injections may be needed. For steroid-dependent cases, immunomodulatory therapy such as methotrexate, mycophenolate or infliximab may be used as steroid sparing agents. In cases of necrotizing scleritis, chemotherapy such as cyclophosphamide may be necessary.

Fortunately, scleritis rare; however, because it is rare, it is frequently misdiagnosed, most commonly as conjunctivitis (pink eye) or allergies. It is important to diagnose and to treat scleritis promptly, not only because it is potentially sight threatening, but because scleritis is often the first manifestation of a life threatening systemic disease that requires urgent attention.

Uveitis is inflammation of the middle layer of the eye, which contains much of the eye’s blood vessels. The uvea is the pigmented inside layer of the eye, lying beneath the sclera and cornea, and comprises the iris, choroid, and ciliary body. The term Uveitis is frequently used for any inflammation of the interior of the eye. Infections, injury and autoimmune disorders may be associated with the development of uveitis, though the exact cause is often unknown. Uveitis disrupts vision by primarily causing problems with the lens, retina, optic nerve, and vitreous.